Finding Peace Amidst Many Wars 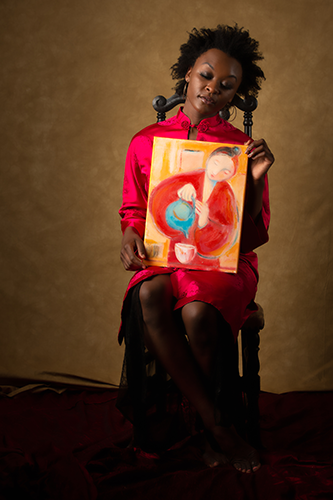 A One Picture Story
by Richard Hatch

While it may be easy to see peace and contentment in this image, one has to stop and look deeply to see the many wars.

The chair Jasmine is sitting on is a family heirloom.  When I was a child it was in my mother’s parents house. Along with my grandparents William and Ida, Ida’s mother Louisa Arnreich (Mama Lou) and Louisa’s brother Homer lived in the house.  I refer to the chair as “Homer’s chair” as my memory or perhaps memories of stories have him sitting in this chair. He was a short man and very quiet. At a very young age he went off to fight at some front in some foreign country in the Great War (it was only during or after World War II that it became known as World War I).  He was single and had no children. Some stories suggested he drank too much. It is likely he suffered greatly from the experience. These days he would probably be labeled with PTSD but back then they referred to it as “shellshocked”. Searching and learning about my ancestors I found out Homer had a younger brother Ferdinand who spent many years in a state hospital for the insane and eventually died there.  I don’t know if Ferdinand also fought in the Great War but he clearly suffered through many personal wars.

The beautiful dress Jasmine is wearing was made by Chinese garment makers.  It was likely they were paid very little and lived in poverty. The label declares “Made in British Crown Colony of Hong Kong”.  It was made in the 1950s-1960s. The garment makers and needleworkers who touched this fabric were most likely female. It is possible they or their parents were in Hong Kong when the Japanese invaded and took over Hong Kong on the day Pearl Harbor was bombed.   They may have carried the suffering of their ancestors who were present during the opium wars of the 1800s. Some of their ancestors may have been enslaved and sent to Peru or Cuba to work in horrendous conditions. The journey on sailing ships leaving China to many parts of the world, sometimes referred to as the Pacific Passage, is described as being as dangerous and inhumane comparable to the notorious Middle Passage of the Atlantic slave trade.  It was common for 30 out of every 100 enslaved Chinese to die on the trip alone. It is also possible the women who made this garment had ancestors who were brought to the USA to work on the first transcontinental railroad. (Coolies)

The oil on canvas that Jasmine is holding so gently depicts a Zen like image of a lady pouring tea. The painting was given to us by a friend who was running short on time.  Dyck Dewid had a terminal illness. He was sharp as a tack while his wife Lynda was suffering from advanced dementia. He knew he would not be around to take care of her so he was busy preparing for her future well-being. They had a house full of memories and art and were rapidly downsizing to move into an assisted living facility.  He was a very intelligent active outspoken activist. He was energetically involved in his local Occupy movement. During his fight with time and making arrangements to make sure his wife would be cared for after his passing, he embraced the experience. He planned in depth his “green” funeral. The coffin he was to be buried in was made of simple pine wood and was disassembled and tucked neatly under his bed during his final weeks. He had great peace despite the multiple wars he was fighting. According to his wishes and plans, at his wake using paints and markers we wrote messages, drew pictures and painted images on his coffin while he laid in full view.   Songs were sung, music played and dancers danced.

Before he died, Dyck gave the painting to Karen to keep for whatever time she thought was right but with the instructions she had to pass it on before she died.  He knew the artist who painted the picture. She was busy fighting emotional and financial wars of her own. He knew she needed money so he paid her to make a painting for him. This was the last painting she made before she took her life. Perhaps it was the only peace she could find amidst her wars.

Jasmine is 20 years old.  She is attending school in New York City working on her BFA.  She is a dancer. She has trained with many talented famous dancers.  I have taken pictures of her, her brother Chris, her sister-in-law Katie and Katie and Chris’s daughter Charlotte.  However, I do not know her story. I do not know details of her ancestors. I do know from experience it is likely many have suffered greatly.

A week prior to the photo shoot when I made this picture I purchased the brown backdrop.  It has a tag with the word “India”. There is a fabric manufacturer in Kanpur which is about 200 miles from where the Buddha was born (Siddhartha Gautama born 600 BCE in Lumbini-now modern day Nepal)  It is possible the fabric was made there or in many other places in India. Maybe the fabric workers’ ancestors of many generations ago heard of the Buddha or perhaps listened to him or even touched him.

The fabric was likely shipped overseas in a container, one of thousands, on the deck of a ship exposed to the elements traveling countless miles across open oceans.  Shipping being what it is, the ship was flagged in some country other than the USA. This way the shipping company can have more leeway to control how crew is treated and paid so they can increase profits.  The typical crew on such a ship is rarely going to be allowed to set foot on the shore of countries they deliver their goods to. Sometimes they spend years crossing the globe before they can make it back to their homeland and see their families.

I was born in 1957, two years after the start of the “Vietnam War”.  Most of what I learned about the war was from the news on one of 3 channels on a black and white TV.  The wars and protests and riots in the streets of Baltimore in the 60’s were only a handful of miles away but somehow they never seemed to interfere with my life as a kid.  By the late 60’s and early 70’s we were writing letters in school to POW’s and wearing bracelets with their names on them. I don’t recall much if any talk of the people in Vietnam suffering.  The news was all about body counts of US soldiers and winning and losing.

I bought my first camera in 1973.  (I saved up 215 dollars working in a grocery store run by Morris and Lisa Zolteck who were Polish immigrants.)  That was the year Nixon announced “the day we have all worked and prayed for has finally come” as the US withdrew its troops to “end the war and bring peace with honor.”  By 1975 I was busy fighting personal wars and what was outside didn’t seem to matter. While I don’t think I won any of those wars, (there are no winners of war) I survived long enough to find healing and to begin to understand how we are all connected.

I have just passed on in my own words what I have learned from many wise people:  Looking deeply, interbeing, interconnectedness and deep listening and mindfulness come to mind.  I have learned that suffering and happiness are connected. Happiness can not exist without suffering. Where you find one, you can find the other.

If you look deeply at peace you can find war and in the midst of great wars you can also find peace.